ACZ nano Extra Strength is the only nano zeolite formula available with over 90% of ACZ nano crystals existing within the nano range as calculated via SEM analysis.

Nano technology scientists have discovered the remarkable fact that by making product ingredient particles extremely small that chemical reactivity and thus product performance is dramatically enhanced. It can be shown mathematically that with equal quantities (weight) of nanometer-sized particles (one-billionth of a meter size) versus micron-sized particles (one millionth of a meter size) that the nanometer-sized particles will exhibit an active surface area increase of about one million times over the exposed active surface area of the larger micron particles. 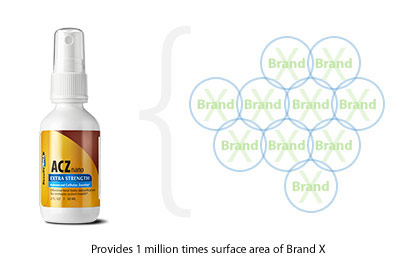 In a recent New York Times article (published November 7, 2007) titled: "Aiding the Environment, a Nanostep at a Time", author Barnaby J. Feder in his comments describing the importance of having effectively large surface areas on the active ingredients of products stated: "Six ounces of nanoscale particles does the job of one ton of micron-size particles because of their vastly increased surface area and the greater ease with which they move?"